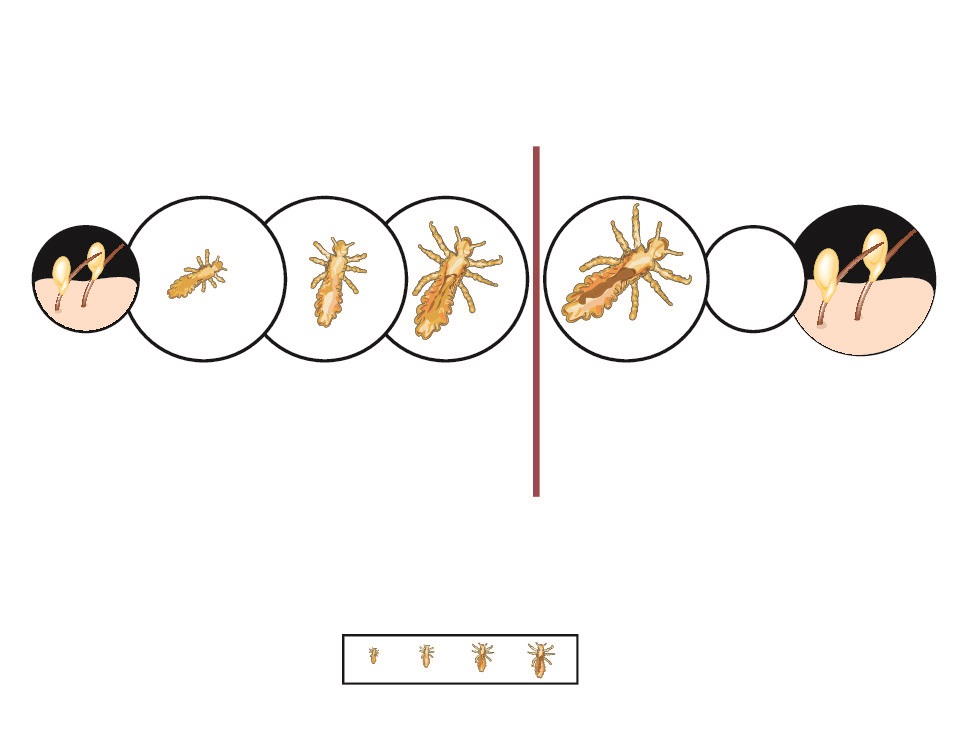 The best weapon in the arsenal against head lice is knowledge. The reason why most head lice treatments today do not work is that they do not address the entire lice life cycle.  This includes the lice egg (also called a nit) stage, nymph stage, and adult louse stage. If you have been struggling with lice, likely the treatment option you have chosen does not address one or more of these three stages of head lice. Understanding this life cycle will give you a better idea of how to not only treat but win the battle against lice.

There are three main different stages of the lice life cycle which can be broken up into several smaller stages. A louse starts out as a nit (or lice egg) laid by a female louse on the hair strand. In accordance with the life cycle of the lice egg, it will hatch and be considered an immature louse (also known as a nymph) before finally maturing into the adult stage of its life.

The nit life cycle starts as an egg laid by a female louse on a single strand of hair. These nits are glued firmly onto the strand of hair to ensure that they do not fall off. The eggs are tiny, even microscopic when they are first laid, but as they grow and become visible around the second or third day, you can spot them by looking at the base of the strand of hair close to where it attaches to the scalp. The eggs are attached to one side of the strand of hair, are oval in shape, and when removed have a brown or tan colored appearance. Placing the nit against a white background is the best way to see its brownish color. The bug inside of this egg needs the warmth provided by the human head to survive and eventually hatch.

The reason most lice treatments fail is that they do not address the eggs that are in the hair. To eradicate an infestation, all of the nits, and we mean every single one of them, has to be removed from the hair to prevent the infestation from coming back. To date, there is nothing on the market that will consistently penetrate this eggshell to kill the bug inside. The only one hundred percent effective way to kill them is to manually remove them from the hair by means of diligent combing and/or hand picking. The lice egg stages are simply laying and hatching which lasts anywhere from six to seven days.

The second phase of the life cycle of the louse is when the bug hatches and is referred to as a nymph. During this stage, which lasts approximately 10 days the louse will go through 3 different molting stages.

After the lice hatch on day 6 or 7, they will experience their first molt on day 8 followed by a second molt five days after they hatch, and a third and final molt ten days after hatching. During the first ten days of their life after they hatch, baby lice bugs, or nymphs, cannot reproduce, meaning they cannot lay eggs making an infestation worse. They spend their days close to the scalp, not really moving, and nourishing themselves with the blood they derive from the human scalp. During this time, away from the protection of their eggshell, they are vulnerable to pesticides and other various lice treatments.

The mature adult louse emerges after the third molting stage around 10 days after it hatches from its egg. During this phase of their life, the bugs are still potentially vulnerable to pesticides or other lice treatments. We say “potentially” because if you are dealing with “super lice” (which are very prevalent), pesticide treatments will prove to be ineffective. We urge you not to rely on chemicals to get rid of a lice infestation. Once the bugs reach this stage, they are fully mature, and the male and female louse gain the ability to reproduce.

Both males and females have 3 main parts of their body, the head, the thorax, and the abdomen. They do not have wings or springy legs, which means they lack the ability to jump or fly. Lice are brown, gray, black in color which varies depending on how long it has been since their last meal.

You can tell the difference between a male and female louse by examining their size. Male lice bugs are smaller and have a shorter abdomen than their female counterparts. Sadly, you cannot tell merely by appearance if you are dealing with super lice or not. After mating, a female louse will begin to lay eggs one to two days later. For the next fifteen to sixteen days after the female louse reaches maturity, head lice will continue to mate, females will lay eggs, and both will feed off of the human scalp. A female louse can lay anywhere from six to ten eggs a day during this period, laying a total of around 200 eggs. This is the third and final stage of the lice stages of life

From the time they are laid until the time they die, the entire life span of lice is roughly 32 to 35 days. This is only the case if a louse remains on a human head for the entire duration of its life. At all life stages of lice, nit, nymph, and full-grown louse, they need the warmth and food source that only the human head provides.

Once off the head, the life span of a louse shortens drastically. Off of the human, head lice are completely exposed and vulnerable. With a lack of food and shelter, head lice can only survive off of the human head for a very short period of time. Head lice feed off of the blood they obtain from the human scalp multiple times a day. Without that nourishment, the louse will quickly starve to death. Off of the human head, the life expectancy of a louse is anywhere from one to two days. If it is in a particularly cold environment, that expectancy likely drops drastically. In either case, left off the head for any period of time a louse will immediately being to grow weak.

While they may survive off the head for 1 to 2 days, this doesn’t mean they will have the strength or ability to grab onto a strand of hair, much less crawl all the way up that strand of hair to the scalp to begin feeding again. Their chances for survival dwindle as time passes. This is good news for families, however. Lice live on the head, not in the home. If a case of head lice is properly treated by removing every sign of lice from the head, bugs, and eggs,  and a follow-up plan is in place, a case of head lice will be eradicated without the hours of cleaning, bagging, and laundering we have all heard about throughout our lives!

LiceDoctors Eliminates Lice at All Stages!

The life cycle of lice continues until all of the bugs and nits are removed from the hair. Head lice cases do not go away by themselves. LiceDoctors offers a safe, all-natural treatment that will leave you lice free. LiceDoctors technicians can eradicate head lice at any and all stages of infestation! Call us for same-day service at 800-224-2537. 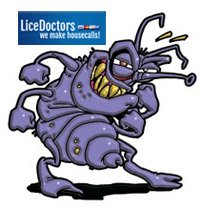 Lice Are Hearty Creatures As LiceDoctors is one of the few, if only, national head lice treatment and nit removal services in the US, we have decided to report on a regular basis about the "goings on" in our markets around the country.

Occasionally at LiceDoctors, we get a call from someone who describes symptoms of either body lice or pubic lice. While we are experts in head lice, we are not experts in body or pubic lice and, therefore, we recommend that those callers contact their doctor.

The reason why most head lice treatments today do not work is because they do not address the lice life cycle. If you’ve been struggling with lice, this information will help you win the battle against lice.