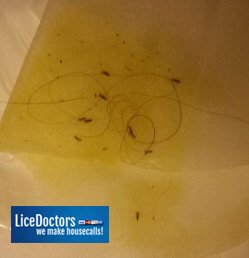 At LiceDoctors, we have known that chemical lice treatments are often ineffective because we have seen it with our own eyes for many years. We have treated families whose heads are filled with crawling bugs after they have used over-the-counter head lice treatments as well as prescription shampoos. It is clear that head lice are very hearty and have now become resistant to many treatments intended to kill them. Picture of nits and lice “A new study finds that lice in at least 25 states have developed resistance to an ingredient found in over-the-counter remedies that are widely recommended by doctors and school officials. The research is being presented Tuesday at a meeting of the American Chemical Society (ACS).” reported CBS News. The article goes on to say that, “Head lice are a giant nuisance — as many as 12 million American school children between the ages of 3 and 11 get them each year, according to the Centers for Disease Control and Prevention. And to make matters worse, researchers continue to find evidence that the tiny pests are becoming genetically resistant to common treatments that people use to battle the bugs.” Researchers from Southern Illinois University gathered lice samples from 30 states, with the help of a group of public health workers. Study shows that the vast majority of lice have genetic mutations which render them resistant to lice chemicals. “We are the first group to collect lice samples from a large number of populations across the U.S.,” explained Kyong Yoon, Ph.D., in a press release. “What we found was that 104 out of the 109 lice populations we tested had high levels of gene mutations, which have been linked to resistance to pyrethroids.” Time Magazine reports that, "His (Dr. Yoon's) research is still ongoing, but what he’s found so far in 109 samples from 30 states is startling: the vast majority of lice now carry genes that are super-resistant to the over-the-counter treatment used against them. Lice is commonly treated by a group of insecticides called pyrethroids, used for mosquito control. One of those, permethrin, is the active ingredient in some anti-lice treatments—but lice populations can develop a trio of mutations that make it resistant to pyrethroids. 'It’s a really, really serious problem right now in the U.S.,” Yoon says. Though head lice aren’t known to transmit any diseases, they can be an itchy nuisance—and now, they’re harder to kill.' " The National Pediculosis Association, a non-profit organization in Cambridge, Massachusetts, says that manual extraction of nits (lice eggs) with a nit-removal comb is the way to go. LiceDoctors has been a leader in the field of lice removal and we have been treating families with using all-natural protocols, which include manual extraction, for over 20 years. We urge you not to needlessly expose your children to ineffective chemicals. Call LiceDoctors in Delaware at 302-319-3698 and a lice professional will come to your home and eliminate the lice and nits. That’s our guarantee! More Resources: http://time.com/4000857/lice-treatment/ http://www.cbsnews.com/news/head-lice-resistant-to-pyrethroid-common-treatment/