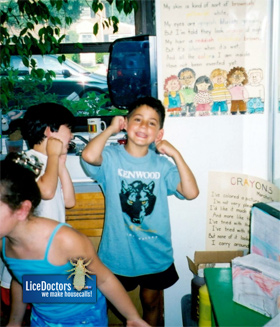 Unlike schools in the Nashville and Memphis area in Tennessee, Knoxville schools take a different approach to the head lice problem that is in accordance with the recommendations of the American Academy of Pediatrics and the Centers for Disease Control and Prevention. The Knoxville School Sentinel reports that: “There’s no medical or social reason to exclude kids with head lice. It sends a negative message. And it could have a negative effect on attendance,” said Lisa Wagoner, supervisor of health services for Knox County Schools, which revised its lice procedures during the 2008-2009 school year. In Knox County, children are no longer automatically sent home for head lice, although they are allowed to leave if that’s what the parent wants to do. The rest of the class is not warned with a letter home unless there are multiple infestations, nor are they routinely screened. "No, we don’t do that anymore,” says Wagoner, “because if we’re not sending anybody home, there’s no reason to screen everyone.”

In Knox County, the emphasis with respect to head lice (Pediculosis) is prevention. The children are told not to share hats and to try to steer clear of head to head contact; the parents are encouraged to check their children for head lice on a regular basis. Children are excused for head lice for only one day; absences after that are considered unexcused. According to the National Association of School Nurse, between 12 million and 24 million days of school are missed each year due to head lice infestations.

In nearby school districts, including Oak Ridge, Blount County and Anderson County Schools, the schools generally send home children found to have nits. At that point, the other classmates are checked by the nurse and sent home if there are signs of lice. Often, there is some variation among schools as to how strict the head lice policy guidelines are. The issue of head lice prevention is very divisive. Schools weigh the risks of increasing the spread of head lice without “no nit” policies against the risk of students missing too much school. For more specific information, call your local school to find out what your school head lice policy is in the Knoxville area.

Our LiceDoctors technician, Bobbi, is busy removing all nits. Why do I keep trying lice shampoos and following the directions but still continue to find nits? The answer to laying to rest a case of lice is to get rid of every single nit (egg) in the head. The shampoos do not affect nits; you have to pull or comb out the nits and it is common for people to leave behind a few nits.

Schools in Farmington Hills and West Bloomfield do not adhere to a strict “no nit” policy with regard to head lice.

Schools in Summerville and Goose Creek do not hold to strict “no nit” policies. Students are allowed to return to school once effective treatment has been administered.