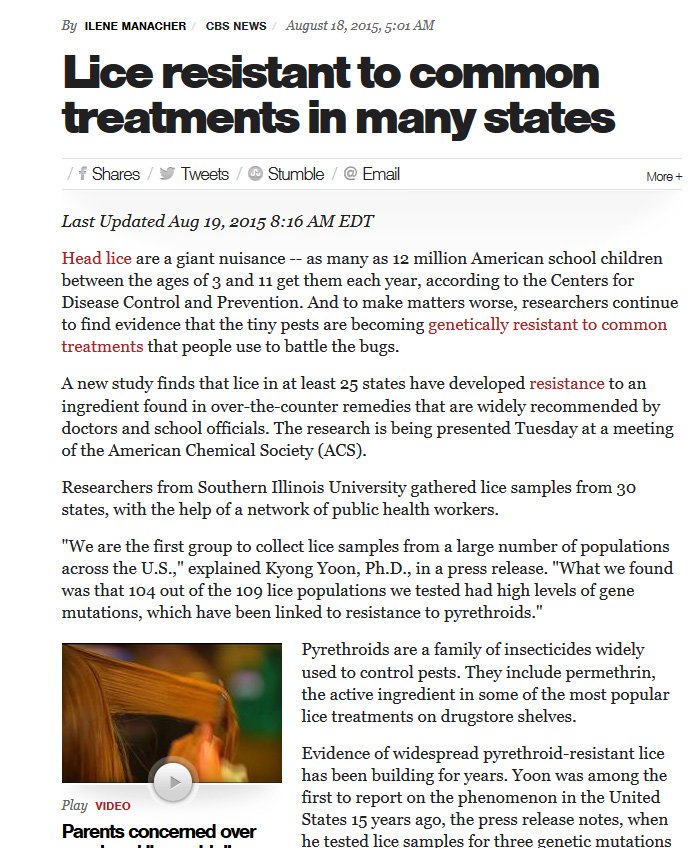 CBS News reported today that, “A new study finds that lice in at least 25 states have developed resistance to an ingredient found in over-the-counter remedies that are widely recommended by doctors and school officials. The research is being presented Tuesday at a meeting of the American Chemical Society (ACS).” The article goes on to say that, “Head lice are a giant nuisance -- as many as 12 million American school children between the ages of 3 and 11 get them each year, according to the Centers for Disease Control and Prevention. And to make matters worse, researchers continue to find evidence that the tiny pests are becoming genetically resistant to common treatments that people use to battle the bugs.” “Researchers from Southern Illinois University gathered lice samples from 30 states, with the help of a network of public health workers. "We are the first group to collect lice samples from a large number of populations across the U.S.," explained Kyong Yoon, Ph.D., in a press release. "What we found was that 104 out of the 109 lice populations we tested had high levels of gene mutations, which have been linked to resistance to pyrethroids."

LiceDoctors has known for years that lice are resistant to chemicals. We have seen it first-hand on many families who have used chemical treatments and still have active cases of head lice. People apply the treatment, following the directions carefully, and then become very frustrated when they see more bugs a week or two later. “The National Pediculosis Association, a non-profit group behind the website HeadLice.org, also offers suggestions for frantic parents who find that a lice treatment product hasn't worked. Stop using the product, and don't follow it with another product, the group says, to avoid exposing the child to too many pesticides. It also says parents should avoid use of Lindane (a prescription treatment that can cause serious side effects), kerosene or pet shampoos. The Association advises manually removing the nits, or lice eggs, with a nit-removal comb. In many cities, professional treatment services have entered the market to help families deal with cases of head lice either at home or in special salons.” LiceDoctors has been a pioneer in the field of lice removal. We have been treating families with our all-natural protocol, which includes manual extraction, for over 20 years. Do not needlessly expose your children to ineffective chemicals. Call LiceDoctors at 800-224-2537 and we will come to your home and eliminate the lice and nits. That’s our guarantee!

Getting Rid of Head Lice: Nitpicking is Key

The best way to get rid of head lice and their eggs (nits) is to manually remove them from the hair. We do not recommend chemical lice treatment (prescription lice treatment, over-the-counter lice remedies, or home-made herbal remedies). No matter what route you take to eradicate lice, combing and nitpicking must be included.

Bolingbrook Schools are in alignment with current practices advised by the CDC and NASN, while Oak Lawn schools retain “no nit” policies at this time.

Bridgeport schools maintain a strict “no nit” policy as stated in this blog.