The Joys of Being a Professional Lice Treatment Technician

The Joys of Being a Professional Lice Treatment Technician

LiceDoctors technicians are here to help you at any and all stages of lice infestations.

call.  A young mother with two children had found lice in the hair of her younger daughter.  I was a little nervous as I gathered my bag of supplies and made my way up the walk to the front door.  Three expectant faces waited but they were not the three faces I expected.  The three concerned faces that greeted me that day were Sally, the mother, her sister, Tara, and her mother-in-law, Mary (names changed for privacy).

They seemed a little bit reluctant at first, perhaps wondering if I was really going to be able to help.  I briefly answered a few questions while standing outside the front door. They were understandably anxious and unknown to them (I hope) so was I. Having once been an overly protective, young mother, I understood the uncertainty.  Finally, Tara said, “The girls are in here” and showed me in.

Tara asked if I was always bombarded with questions as soon as I got to the door.  I didn’t exactly have an answer.  Based on the questions she had asked, Sally was obviously a little overwhelmed by this situation. I heard myself respond “not in my experience.”  I was absolutely confident in my ability to help with this specific problem. I just needed to make sure Sally was confident in my ability to provide the care needed to resolve this issue.  Sally had already gone to the local pharmacy and purchased a lice remedy.  She was doubly stressed now because it remedied nothing.  After using the chemicals, twice, Sally’s sister still found live lice on the scalp of the younger daughter. With two failed attempts already, Sally was doubtful that any treatment would work.

On top of being concerned that the treatment would fail, Sally was also concerned about how long it would take.  Her husband would soon be home and dinner still had to be made.  To help expedite the process, I had Tara follow my instructions and begin the treatment on the older daughter, Brittany, while I applied the treatment for the younger daughter, Emily.

I explained where lice like to lay their eggs and how they use the warmth of the scalp as an incubator.  I had printed instructions with me.  I showed them pictures of lice in all three stages of life and showed them live lice under a magnifying glass. What I couldn’t show them was what a nit looked like.  Sally had already gone through the children’s hair with a fine tooth comb, literally.  She had done such a good job, in fact, that I could not find one tiny nit in the hair of either child.  I used this as a testament to her ability to not only eliminate the nits, but the live lice as well. Brittany was lice free.  Emily, however, had several live lice, but they were in the nymph stage.  This made them especially difficult to see because at that stage of life they are so very tiny that in Emily’s golden hair they looked like tiny specks of black pepper.

I talked as I combed the treatment through Emily’s hair, explaining why knowing how to identify every stage of life of the lice is key to eliminating them.  I also explained how important it is to adhere closely to the follow-up plan.  As Brittany and Emily sat with the treatment in their hair, I dry combed through the hair of the adults for any signs of lice.  It was then time to wash and rinse the treatment from Emily’s hair.

As soon as Mary was found to be lice-free she said her goodbyes.  Sally and Tara cracked open the wine and let some of the tension go.  I was happy to see that Sally felt more confident in her ability to successfully address the situation.  Before I arrived she feared the worst.  She told me how she thought she was going to have to throw away plush toys and stuffed animals.  She said she had already pulled the bedding from all the beds in the house and was diligently washing and drying everything.  Knowing she wouldn’t have to do so much housework if she did the simple follow-up gave her a surge of confidence.  She now felt that she was able to tackle this without feeling so overwhelmed.

Just as I was wrapping up and getting ready to head home Sally’s husband, Jordan, walked in from work.  It was late on a Sunday evening and he got to come home to a house full of women and children with their hair pulled up on top of their heads, covered in plastic.  He was surprisingly chipper and hopped happily into the chair so I could check him quickly before going.

It turned out that only Emily had lice.  She was not happy, but I had brought some dollar store toys and pretty new bows and hair clips.  I told her she had been so sweet and patient that if it was alright with her mommy and daddy that she and Brittany could each pick out a toy and whichever hair ties or barrettes they liked.  They both picked nothing but hair accessories!

We said goodnight and both girls hugged me.  Jordan walked me out to my car and Sally and Tara raised a glass of wine in my honor.  It feels good to do a job that helps people.  I’m lucky to have found a job that when I leave I know I’m leaving people feeling confident and sure of themselves when just a short time before there was fear and uncertainty.

LiceDoctors is proud and honored to help our clients get relief from head lice, for an appointment or more information call 720-292-1991 today for fast safe and effective treatment from a wonderful competent technician like Laura. 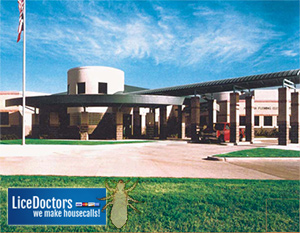 According to the Texas Department of State Health Services’ (DSHS) web site, each school district can set its only policy regarding head lice. In an area as large as Houston and surrounding communities, there will be some varying criteria once a student has been treated for head lice.

Get to know the facts of lice so you are equipped to do battle if or when your kids get them.

Don’t Let Bugs Bring You Down!

Getting lice can be unnerving but remember lice are a just a nuisance that can be eliminated. Lice tech, Dana, shares her story.