Popularity of Head Lice vs. Congress

Popularity of Head Lice vs. Congress 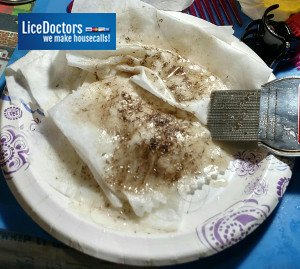 An advanced case of head lice that LiceDoctors treated. Yes, the brown on the paper towel is an abundance of head lice. Just how unpopular are head lice among the American public? In a recently conducted study attempting to gauge the popularity of the Congress of the United States, the benchmark against which it was gauged with none other than head lice. The fact that head lice was ranked more popular than Congress is incidental to the fact that head lice was used as a barometer because it is so widely reviled. Other parameters were colonoscopies and root canals. Given that at LiceDoctors we deal with head lice every day, we know that head lice can be unpleasant and have a huge ick factor. However, unlike root canal, there need not be any pain associated with head lice and its eradication. In fact head lice would not be so hated, if more people understood how to get rid of head lice and why it is important to call in professionals to do so. While we won't go as far as to say the need for a professional is as great with head lice as it is for a colonoscopy or root canal, bringing in an expert certainly makes the whole experience far less onerous. This is a picture of the same case as the tech neared the end of treatment. There are only 4 baby nits (eggs) left on this paper towel and no more left in the hair! Part of the reason that head lice strikes fear in the hearts of many people is that they are afraid that if they get a case of head lice, they will not be able to get rid of it. They imagine themselves with the head filled with bugs with no end in sight. They imagine that they will have to scrub the entire house, do loads of laundry, and sterilize everything. In fact, we can assure you that the above-mentioned fears are not at all true. Again if more people understood how to treat head lice the stigma would be greatly reduced as well. There is no need to fight a long battle against head lice. Chemicals are often ineffective in getting rid of head lice as the bugs have developed an immunity to them. The way to eliminate lice is labor-intensive: it involves suffocating the bugs and handpicking the nits (eggs). Call in the experts who know what we are looking for to  find those eggs and lice. Call LiceDoctors in Western Massachusetts at 413-314-2024 for prompt, safe, and effective treatment.

HOW I HELP MY CUSTOMERS

In this blog, seasoned lice professional Sean shares how he helps clients with a caring and thorough approach. This is why his clients love him!

Just Why Do Lice Spread So Quickly in the Home?

If one person in a family gets head lice, chances are at least one other person has it. Any time you hug a person who has lice, you are at risk of contracting a case.

LYNN PUBLIC SCHOOLS HEAD LICE POLICY Lynn schools allow students to remain in school even if they have nits. “The Lynn Public Schools has revised its head lice policy to conform to the recommendations of the Centers for Disease Control (CDC), the American Academy of Pediatrics (AAP), the National Association of School Nurses (NASN), the American School Health Association (ASHA), and the Massachusetts Department of Public Health.