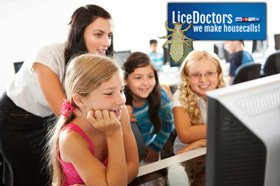 Schools in Omaha have recently modified their head lice policy; “Head lice can happen to anyone, it is not a sign of having poor health habits or being dirty. The most important fact to remember is that the problem should be quickly treated because delays will only help spread the infestation throughout your family and community. Students are excluded until first treatment is completed and no live lice are seen. If the child has repeated re-infestation (3 documented exclusions), it is recommended that the child be free of nits before returning to school….” Related link: mps.mpsomaha.org An article in the local newspaper states, “Head lice are hard to get rid of and spread easily---especially among children. But in a revised report, the American Academy of Pediatrics (AAP) said a little head lice is no excuse for children to miss school.

The Omaha Public School District recently altered its policy and sends kids home when symptoms appeared. "Our change would be the timing...the classroom would get checked at the end of the day and that would avoid individual students being picked out of the group," Sharon Wade, OPS Health Services Supervisor said. Wade said parental hysteria over head lice is unwarranted."Head lice don't fly they don't hop...they crawl...so they're not the danger that some people present them to be," she said. Mainly causing itching and parental squeamishness, head lice is not a sign of poor hygiene and are usually transmitted from head-to-head contact. Wade said parents need to take a pro-active approach and inspect their child's hair for nits often. "Its something that we need to deal with and we need to be educated about dealing with it effectively," she said. The AAP said most kids get infected through very close contact -- like sharing a pillow at a sleep over-- and that keeping them out of schools or camps -- simply deprives the kids of too much time.

Lincoln Public Schools state that students with head lice will no longer be sent home based on recommendations from a 2010 American Academy of Pediatrics recommendation. Related link:  journalstar.com An article in the local newspaper states that, “In the past, any sign of lice could land students a couple days off. Now, they'll stay in the classroom. "We don't want them to miss school for something that isn't interfering with learning," Lincoln Public School Health Service's Marjorie Theel said. Theel said many things that people think about lice, like that they jump and fly, are just myths.  While they may be irritating, they're not dangerous. She said the recommended practices from the American Academy of Pediatrics backs that up. "There's no disease associated with it," Theel said. "It's just a nuisance." While only the school year will show how the new policy shapes up, right now, about one percent of LPS students catch the bugs every year. Based on how other schools with similar rules are faring, Theel doesn't see that number changing. "Once you've implemented these guidelines, there has not been an increase in head lice," she said. "That's the concern, that its going to spread, and that just hasn't happened." Related link: www.1011now.com

Most schools around The Woodlands and Spring will allow students back in school once they have begun treatment and no live lice are present. Tomball Public Schools Because lice spread so easily, the District will need to exclude any student found to have live lice until after one treatment of an FDA-approved shampoo or cream rinse. If careful observation indicates that a student has head lice, the school nurse will contact the student’s parent and inform the parent that the student will need to be picked up from school and will need to stay home until after an initial treatment is applied.

Indianapolis Doctor tells patient that she should not use lice chemicals when she is pregnant. Here we relay what he told her.