Head lice have been around for hundreds of thousands of years. We have learned a lot about what works and what does not work to get rid of these unwanted bugs. Hint: chemicals are not the answer!

How were head lice treated across the across the ages of time? The answers vary throughout time and around the world. In 1536 BC, according to the “Eber’s Papyrus”, in Egypt it was recommended to take a mouth full of water and warm date meal, to spit onto the skin to drive away lice. The effectiveness of this treatment is suspect, and many chose to simply shave off all hair on the body to avoid lice.

In China, around 1200 BC, it was common to use mercury and arsenic compounds in an attempt to kill lice. Today we know how toxic those materials can be! In 64 AD, Nero’s army used external applications of cedar tree oil to treat their infestations. This is still used by some today as an aromatherapy treatment, but now we know that the #1 essential oil that lice avoid is actually peppermint.

Roman philosopher Pliny the Elder recommended the topical application of dog fat, or “eating serpents cooked like eels” to eliminate lice. In 1240 CE, Arab philosopher Ibn Al-Baytar suggested that honey, painted on an infested child’s skin, would kill lice. It’s true that lice can be smothered – although they can hold their breath so the application must stay on for several hours, but honey has the risk of drawing more insects.

In the first English written Pediatrics book from 1544, Thomas Phaer recommended a combination of aloe, wormwood, vinegar, and powdered stavisacre seeds to be applied to clothing and worn next to the skin to keep the bugs away. In 1681, Nicholas Culpeper wrote in “The Complete Herbal” that tobacco juice applied to the head would kill lice.

Today we know that nicotine can be absorbed through the skin, and tobacco has been proven not to be an efficient way to kill lice.

During World War II, lice was rampant among the soldiers in the trenches, and armies used planes to coat the trenches with DDT in an attempt to control lice and other parasites. While DDT is still used as an insecticide, it has been found to be toxic, especially when DDT has built up in the body from multiple treatments. After the American Civil War, kerosene became widely available, and has been documented as a lice treatment as recently as the 1950’s. This is now strongly advised against, due to the high danger of fire.

Modern over the counter medications include pyrethrins (known by the brand name Triple X -  formulated from chrysanthemums and dangerous for those with ragweed allergies), permethrin (known by the brand name Nix - a neurotoxin), Ivermectin lotion (known by the brand name Sklice – an oral treatment), and malathion (known commercially as Ovide – a poison that kills live lice). According to the American School Health Association, none of these current lice products on the market are 100% ovicidal (able to kill eggs, or nits). There is also resistance in live bugs for all of the above treatments, and a second treatment is often required in an attempt to kill survivors (the chemicals often fail to kill bugs and do not penetrate the egg). This means that even after a treatment, you may still be at risk of infesting others with lice. Treating with these methods demands multiple treatments, and there are significant risk factors for those with allergies, sensitive skin, pregnant women, and children under the age of 2.

When choosing a treatment for lice it is important to consider effectiveness, safety, ease of use, cost, and resistance to chemicals. At Lice Doctors, we use 100% natural olive oil, a fine toothed nit comb, and technicians that physically remove all live bugs and nits. There are no side effects, it is healthy for the hair and skin, and safe for all ages! Once you have a proper metal nit comb (we recommend the Terminator brand), you can continue to use it for follow up and any possible future infestations. Since all lice and nits die within hours of being removed from the scalp, there is no chance of them building up a resistance to the treatment. A treatment with LiceDoctors gives you a 100% guarantee, is safe, includes an easy to use follow up guide, is cost-effective, and uses no chemicals!

For same day treatment in your own home in the Miami Gardens and North Miami vicinity call 786-358-5460 . Treatments are available every day of the week and weekends, morning, afternoon, or night!

How to Identify Nits

How do I know if what I am looking at are nits or dandruff or something else? That is a question that we frequently hear from parents in McKinney and Allen and surrounding areas. It can be tricky to identify the differences.

Every school sets its own policy for how to deal with head lice, so it is important to check with your child‘s school for particulars. The following head lice policy has been reported: HOOVER PUBLIC SCHOOLS Hoover schools hold to a “no nit“ policy, stating that children will not be allowed in the classroom if “Head lice or continued presence of nits after treatment of head lice are present.” Source: Hoover City Schools website LiceDoctors can help get your child back in school as soon as your all- natural, chemical-free, and, most importantly, effective treatment is complete. 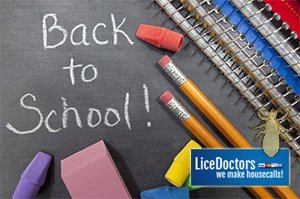 The Department of Health recommends that schools allow students with nits to stay in school as long as there are no live lice present in the hair. Students with an active infestation of live bugs should be allowed to remain in school until the end of the day and then should be sent home with an education packet on how to eradicate lice.