Can Kids Get Head Lice From Sharing a Computer and Keyboard?

Can Kids Get Head Lice From Sharing a Computer and Keyboard? 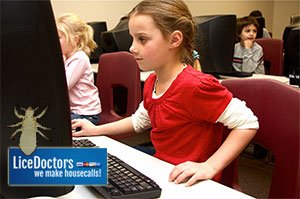 Lice have become so commonplace in school that parents are really afraid that their kids will pick up a case from another student. It is not an unreasonable fear, given that head lice affect a reported 12 million school children each year. As a parent, it is helpful to keep in mind that head lice are generally not picked up through objects such as a computer and keyboard. While it is not out of the realm of possibility, it is an unlikely conduit for passing along lice. For a child to pick up head lice through a keyboard, the lice would need to have climbed out of someone's head onto an object that offers it no food. A keyboard is not an inviting place for a louse. The bug wants temperature of around 98.6 degrees and human blood for its breakfast, lunch, and dinner. Lice generally only leave a human head if they have another human head to go to. Assuming that the lice did climb out of the head onto the keyboard, they would die off of the head fairly quickly. The child would have to sit down at the keyboard shortly after the lice arrived on the keyboard and the lice would have to make their way up the arms of the child into the child's hair. While this is not an impossibility, it is an unlikely scenario. In fact an estimated 95% of head lice cases are transmitted from head to head contact, not through and in inanimate object or vector. The biggest risk of kids using computers at school is if the kids are lined up in close contact to each other. In that case, lice may migrate from one head to another. As a parent, you can not completely protect your child against head lice.The best advice is to spray or gel the hair to give it a barrier to ward off the lice and then check your child routinely. If you find signs of lice or nits, LiceDoctors can help you. Just call us in the Harrisburg area at 717-963-2100 and we will eliminate the lice at your home at your convenience. 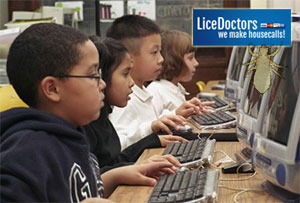 Schools in the Orem area do not hold to a strict "no nit" policy for head lice. This means that students are not excluded from attending classes solely for the presence of nits.

Bridgeport schools maintain a strict “no nit” policy as stated in this blog.

Schools in the Daly City area follow the current recommendations from the American Academy of Pediatrics and do not exclude children from the classroom because of symptoms of head lice, either live bugs or nits.