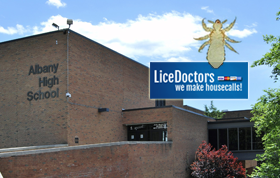 Albany’s Capital Region School Lice Policies The decision on school lice policies in Albany is left to individual school districts. Some districts in the Capital District maintain “no nit” polices, while others have relaxed their standards and allow students with nits (eggs) to return to school after treatment. The New York Statewide School Health Services Center, an information center for schools on health related issues published the following on its web site regarding New York school’s head lice policies: Policy and Procedures Should schools have a "No-Nit" Policy? American Academy of Pediatrics (AAP) attempts to clarify diagnosis and treatment of head lice and makes recommendations for dealing with this condition in school. Among its recommendations, the AAP says no healthy child should be excluded from, or allowed to miss school because of head lice, and that "no nit" policies for return to school should be discouraged. Numerous anecdotal reports exist of children missing weeks of school and even being forced to repeat a grade because of head lice. Although not painful or a serious health hazard, head lice are the cause of much embarrassment and misunderstanding, many unnecessary days lost from school and work, and millions of dollars spent on remedies.”

“Albany Unified School District has quite strict lice policies, which experts have said should be dismissed. It's harder to transmit lice, many pediatricians say, than was previously believed. In July (2013), the American Academy of Pediatrics released a new report, attached here, indicating that children with lice should not be kept out of school. "A child should not be restricted from school attendance because of lice, because head lice have low contagion within classrooms," the report states. "Some schools have had 'no-nit' policies under which a child was not allowed to return to school until all nits were removed. However, most researchers agree that no-nit policies should be abandoned." Director of Curriculum and Instruction Lynda Hornada said, in October, the district now only sends home children with active lice. Cornell and Ocean View have been following this policy since 2007. Marin started in 2010.]” The Albany school district is somewhat vague on its policy. Superintendent Stephenson said that the district has talked to parents at the elementary schools about allowing kids back in class before all nits, or lice eggs, are removed. But parents were not open to the idea. "We have had presentations at our elementary PTAs about these recommendations," she said. "We are still facing public (parent) opposition to implementing a policy that allows students to remain in school after being treated for lice if nits are still in the hair. We still have a lot of education to do with the public on this issue." The July report said that, not only should no-nit policies be abandoned, students should be allowed to remain in school, even with live lice. "Because a child with an active head lice infestation likely has had the infestation for 1 month or more by the time it is discovered and poses little risk to others from the infestation, he or she should remain in class but be discouraged from close direct head contact with others," according to the report. According to the Directors of Health Promotion and Education, lice can affect anyone.

The Schenectady Public School District maintains a “no nit” policy. According to the district web site, “Elimination of pediculi (head lice) a nationally increasing communicable public health problem is one of the important aspects for the health of our students. We desire your cooperation by becoming aware of the situation, occasionally checking your child’s/children’s hair at home and instituting corrective treatment. Should they become infested, please notify school immediately. We will then conduct the necessary inspections. If during our inspection at school the nurse finds pediculosis or nits (eggs) in your child’s hair, you will be notified by her. She will send home an instruction sheet for consultation with your doctor or pharmacist about treatment. Your child cannot come back to school until he or she has been treated and is free of all nits (eggs). Parental accompaniment is required during re-entry inspection by school personnel.”

North Colonie schools do not have a “no nit” policy. Children with lice are identified and sent home for treatment but are then readmitted. The district policy is as follows: “For a child having been identified as having head lice, the student will be isolated and the parent contacted in order to provide the appropriate treatment. The student may return to school following verified treatment but should receive a follow-up treatment in 7-10 days. Students will be re-examined to determine whether or not nits have hatched, or lice have reappeared.”

In the summer of 2012 Troy’s school board enacted a new head lice policy. While there were some concerns regarding the new lice policy, the board voted to drop its “no nit policy” due to “tremendous absenteeism” Mr. Tuttman stated that “lice policies have varied among our buildings. Nits are non-communicable but difficult to remove. This (new) policy was reviewed by the school physician.